Five facts you need to know about scoliosis 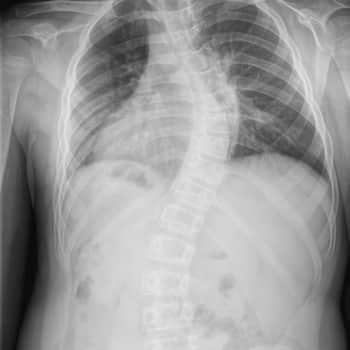 Scoliosis is a disease in which the spine bends sideways. The most common type of condition is called 'idiopathic scoliosis' - scoliosis with an unknown root cause. Here are five facts you need to know about recognizing and treating idiopathic scoliosis.

Fact 1
More than 80% of cases of idiopathic scoliosis develop in adolescence. The reason for this is not fully understood. Still, it is assumed that during this period, human development is accelerated, and this plays a significant role in the course of the disease. Therefore, even after a person reaches skeletal maturity, if the angle of scoliosis is less than 40 degrees, the disease is unlikely to progress. Thus, the key to treating scoliosis is early diagnosis and timely treatment to avoid increasing the distortion above 40 degrees.

Fact 2
Scoliosis is often almost invisible. Especially in the initial stages, scoliosis is difficult to notice and is asymptomatic. Officially, the diagnosis is made on the basis of the angle of distortion, also called 'Cobb's angle'. We have scoliosis if Cobb's angle is 10 degrees or more. Scoliosis is usually noticed for the first time when visiting a pediatrician or during an examination at school. In some cases, the parent may see an unusual lateral curvature of the spine when the child's back is exposed, for example, in a swimsuit.

Fact 3
Active treatment of scoliosis is usually not necessary. Although scoliosis is a serious diagnosis, in most cases, these distortions do not progress far enough to cause discomfort or require treatment. For most people who have idiopathic scoliosis, a periodic visit to a doctor every 4-6 months is sufficient until skeletal maturity occurs. In cases where the Cobb angle reaches 25-30 degrees and progresses by more than 5 degrees within six months, there is a high risk of deterioration.

Fact 4
There is a so-called corrective corset for scoliosis, which can prevent the progression of distortion. When the curvature of the vertebral arch is above 25 degrees and significant skeletal growth is forthcoming, it is possible to recommend treatment with a corrective corset. Currently, the corrective corset is the only non-surgical treatment that has been shown to slow the disease's progression and reduce the likelihood of requiring surgical treatment. Some studies show that some types of exercise can reduce or slow down the worsening of scoliosis; unfortunately, their scientific evidence supporting their effectiveness is currently insufficient.

Fact 5
Surgical treatment is applied only as a last resort. In rare cases, when idiopathic scoliosis continues to progress above 45-50 degrees, and the corrective corset has not helped to stop the development, surgical treatment becomes an option. The most commonly used surgical method to correct scoliosis is posterior spinal fusion. Postoperative recovery can last from 6 to 12 months. The main risks are infection, excessive bleeding, and other complications. In cases where the distortion has not reached 45-50 degrees, the potential benefits of surgery are unlikely to outweigh the risks.

Conclusion
Although most scoliosis cases are relatively mild, it is essential to be aware that if necessary, treatment methods have improved over the last decades. Thus, scoliosis in young people is a treatable condition!

It may take up to a minute...
CLOSE